B cell commitment and development

A fundamental question in haematopoiesis is how stem cells and early progenitors become committed to a single developmental pathway, and then differentiate into mature cell types of the selected lineage. The entry of lymphoid progenitors into the B cell lineage depends on several transcription factors, including E2A, EBF1, and Pax5. E2A and EBF1 function as B cell specification factors while our work has identified Pax5 as the critical B cell commitment factor that restricts the developmental potential of lymphoid progenitors to the B cell pathway. More recently, we have shown that the transcription factor Ikaros controls signalling of the pre-B cell receptor by activating genes coding for signal transducers and repressing genes involved in the down-regulation of pre-BCR signalling. This year, we have demonstrated an essential role for the transcription factor Bhlhe41 in controlling the development and self-renewal of innate-like B cells.

Upon encounter of foreign antigens, mature B cells undergo affinity maturation of their B cell receptor and subsequently differentiate to plasma cells that provide acute and long-term protection against pathogens by generating and secreting high-affinity antibodies. Whereas the immune function of mature B cells strictly depends on Pax5, E2A, EBF1 and Ikaros (Figure 1), the transcriptional regulator Blimp1 controls terminal differentiation to plasma cells. By analysing the molecular mechanism of Blimp1 action, we recently showed that Blimp1 shuts down the B cell gene expression program by directly repressing B-cell-specific genes, while promoting plasma cell differentiation by activating genes involved in the unfolded protein response and in immunoglobulin secretion.

PAX5 mutations and translocations are frequently associated with B-cell acute lymphoblastic leukemia (B-ALL). By generating mouse models for the human PAX5-ETV6 and PAX5-JAK2 translocations, we could demonstrate that PAX5-ETV6 functions as a potent oncoprotein in combination with loss of the tumor suppressor CDKN2A,B. We are currently investigating whether the PAX5-JAK2 translocation may function as a dual-hit mutation by inactivating the PAX5 function of the translocated allele, while simultaneously activating JAK-STAT signaling.

The development of B cells and αβ T cells depends on the functional rearrangement of Igh and Igk or Tcrb and Tcra loci, respectively. All four loci are large in size (0.7 to 3 megabases), have a complex structure, and undergo reversible contraction by looping in rearranging lymphocytes. Locus contraction is thus a general mechanism that juxtaposes distantly located V genes of the large V gene cluster next to D or J segments in the 3’ proximal domain, which facilitates V-(D)J recombination. We previously demonstrated an essential role of Pax5 in the control of Igh locus contraction, and identified Pax5-activated intergenic repeats (PAIRs) in the distal VH gene cluster as potential regulatory elements involved in this process. 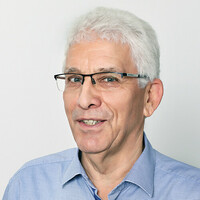