From egg to embryo: how developing zebrafish keep RNA levels in check

Mature egg cells and early embryos do not generate their own RNA molecules – instead, they rely on stored maternal RNAs to synthesise their proteins. As the embryo develops, some of these RNAs become superfluous and need to be degraded. Researchers at the IMP pinpointed Ski7 as a regulator of normal RNA levels in early zebrafish embryos. Their findings were published in the journal “PLOS Genetics”.

At the beginning of an embryo’s development, all cellular processes are regulated by maternal products deposited in the egg, such as RNA molecules and proteins. As the embryo grows, some of these accumulated molecules become superfluous and need to be removed to ensure development continues normally. Although scientists have identified many molecular pathways that regulate RNA degradation in the embryo, some pieces of the puzzle are still missing to understand the full picture.

In yeast, two multiprotein complexes, called the exosome and ‘superkiller’ (Ski), work together to degrade unwanted RNA molecules. Historically, scientists assumed the Ski-exosome mechanism did not operate in animals as it does in yeast, because the key protein that mediates the interaction between the exosome and the Ski complex, Ski7, was nowhere to be found in animal genomes. However, some developmental stages in animals, such as the transition stage from an egg cell to an embryo, require major changes in RNA abundance and could make use of Ski7 or a similar protein to help the process.

“The Ski7 protein acts as an adaptor between the exosome and the Ski complex, and we hypothesised that it should be there for this system to work,” explains Luis Cabrera-Quio, a recent PhD graduate of the Pauli Lab. “Two recent studies pinpointed the well-hidden location of Ski7 in the mouse and human genomes – we are the first group to identify and characterise it in fish.”

In a new study published in “PLOS Genetics”, researchers in the Pauli Lab with the help of Alex Schleiffer have located Ski7 in the zebrafish genome and measured its expression levels in zebrafish embryos. To understand its potential functions in development, the scientists used the CRISPR/Cas9 system to generate a mutant line of zebrafish that lacked the gene to produce Ski7. They then compared normal embryos to the mutant line to see what functions were impaired by the mutation.

The authors and subjects of the Ski7 study 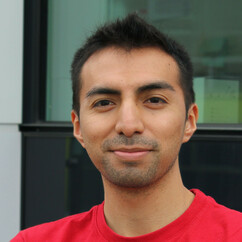 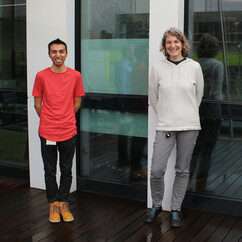 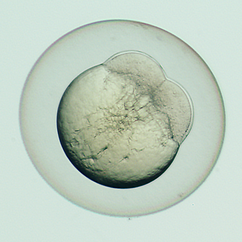 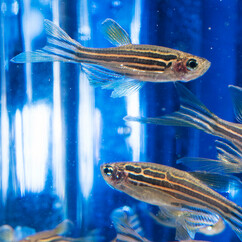 Ski7, a regulator of RNA levels

“When we found that Ski7 was highly expressed in the mature eggs and early embryos of zebrafish, we realised it might play an important role in the oocyte-to-embryo transition. Generating mutant fish that couldn’t produce Ski7 was the logical next step to understand this protein’s function,” says Andrea Pauli.

The first difference that the scientists noted was that a fraction of mutant embryos failed to develop altogether. However, those that completed their first cell division went on to grow normally and reached adulthood. This partial survival suggests that Ski7 may play an important – yet not always vital – role for healthy development. The main question remained: does Ski7 help regulating RNA degradation in zebrafish like it does in yeast?

When the team compared the gene expression patterns of normal and mutant embryos, they found that the absence of Ski7 led to thousands of genes being either overly expressed, or abnormally low. As a result, the abundance of specific RNAs and proteins in mutant embryos differed from their natural counterpart.

The next step was to investigate what mis-regulated genes normally do. The scientists surveyed the over- and underabundant RNAs in mutant fish embryos and found that many of them encoded for proteins that play a role in the response to reductive/oxidative stress. In yeast, lab-generated mutants that lack Ski7 tend to be less resistant to environmental stress. However, Quio and colleagues were in for surprising results with the zebrafish.

Although only a fraction of mutant embryos developed normally, the survivors had become more resistant to reductive stress than the normal, wildtype embryos. “That was really unexpected – it could be that Ski7 contributes to the dynamic regulation of the reduction/oxidation balance in early embryos. When it is absent, some embryos never develop, and those that do might compensate this lack of regulation with their overabundant maternal RNAs, producing proteins that enable the embryo to withstand reductive agents,” says Quio. This idea, however, remains to be tested.

Overall, Ski7’s basic role in degrading superfluous RNA molecules proves to be highly conserved, from unicellular organisms such as yeast to complex animals such as fish, mice, and humans. The study shows that Ski7 plays an important part in the normal development of egg cells and early embryos in the zebrafish by selectively regulating RNA levels.