Scientists at the IMP and collaborators have investigated how different forms of cancer therapy can influence the efficacy of subsequent therapies. They found that administering targeted therapy, drugs which target mutated cells, could jeopardise the effectiveness of immune stimulating immunotherapies in skin cancer patients – an important finding as these treatments are often given to patients in this sequence. This phenomenon, called cross-resistance, highlights the need to understand how therapies shape tumours. The researchers’ findings, now published in the journal Nature Cancer, will help improve clinical practices.

Battling cancer can be a tricky business. Scientists and clinicians have developed a host of strategies, drugs, and treatments to combat this disease and its many forms, but they have faced a new challenge: within a few months of treatment, most tumours start growing back – they gain resistance to therapies.

In such cases, doctors need to combine several forms of therapy in sequence. Two types of therapy, the pillars of cancer treatment, are often applied to the same patients: targeted therapy acts fast and blocks vital molecular pathways within cancer cells, thereby stopping their proliferation; immunotherapy mobilises and stimulates the patient’s immune cells to eradicate tumour cells, which can induce long-lasting responses, but acts less reliably than targeted therapy.

Clinicians often administer targeted therapy first until they observe resistance. Only then do they turn to immunotherapy to finish the job. This strategy, however, is not failproof: some patients do not respond to immunotherapy nearly as well as they should, and their tumours continue to grow. In this case, scientists talk of cross-resistance: the tumours manage to evade the sequential action of multiple types of therapy whose modes of action differ entirely.

Tipped off by this peculiar phenomenon, researchers have started to wonder whether resistance to one type of therapy could have an influence on entirely different forms of treatment. An international team of scientists led by the lab of Anna Obenauf at the IMP have investigated the effect of resistance to targeted therapy on the composition of skin tumours in mice, and its influence on subsequent immunotherapy. With the help of their collaborators at the Medical University of Vienna and in Switzerland, Australia, and the UK, they confirmed their findings with clinical data. Their study is now published in the journal Nature Cancer and could inform future clinical practices in treating skin cancer.

The scientists found that tumours that had developed resistance to targeted therapy were short of a type of cells – dendritic cells – that are crucial to activate the immune system during immunotherapy. Not only were there fewer dendritic cells in these tumours, but they did not function properly. As a result, immunotherapy was ineffective in waking the immune system from slumber, and the tumours kept on growing, unnoticed.

"The good news is that clinical trials are ongoing to develop strategies to activate dendritic cells and improve the effectiveness of immunotherapy," explains Lisa Haas. "Our work provides solid evidence that resistance to immunotherapy arises in part because of the changes that occur within tumours after they’ve gained resistance to targeted therapy." The researchers’ next plan of attack is to identify the molecules that affect the number and function of dendritic cells.

A strategy to prevent resistance

Clinicians are still exploring which kind of therapy they should employ first, and for how long. Such decisions can lead to very different outcomes for patients with cancer. This study brings a guiding light to the debate.

“We need to understand how therapies shape tumours and influence subsequent therapeutic responses – that certainly will open up new treatment opportunities and change the way we treat cancer patients,” says Anna Obenauf, group leader at the IMP. “Our results help honing our best weapons against skin cancer and could have an impact on clinical practices.” 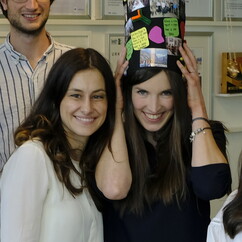