For the first time since she was awarded a Breakthrough Prize in Life Sciences, IMP alumna and board member Angelika Amon visited the Vienna BioCenter. The occasion was used to celebrate her achievement in the frame of a reception.

Today, Angelika Amon visited the Vienna BioCenter to give the seminar “The role of aneuploidy in tumorigenesis”, hosted by Daniel Gerlich. It was Amon’s first visit since she was awarded the Breakthrough Prize in Life Sciences 2019. Amon is the Kathleen and Curtis Marble Professor of Cancer Research at the Koch Institute for Integrative Cancer Research at the MIT.

Her history with the IMP goes back to 1988, when she was a master student. Later she joined the lab of Kim Nasmyth for her PhD. After moving to the US in the 1993, Angelika has kept her connections to the IMP, through personal friendships, professional functions and common research interests. In 2009, she became a member of the IMP’s Scientific Advisory Board.

One of the oldest academic “friends of the house”, Amon has close ties with a number of faculty members. This was highlighted in an address by IMP scientific director Jan-Michael Peters, who knows Angelika since they both worked in Boston in the 1990s.

The celebration was attended by faculty of IMP, IMBA and GMI as well as colleagues and friends of Angelika Amon. As a token of appreciation, Angelika was presented with a piece of granite from the iconic old IMP building with an engraved IMP logo – the second paper weight of this limited edition, following a similar reception for Kim Nasmyth, who preceded her in winning a Breakthrough Prize by one year. Amon has repeatedly highlighted that the IMP was instrumental as the first steppingstone in her research career. 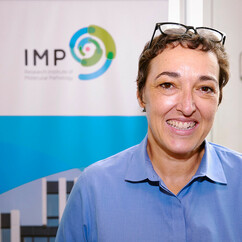 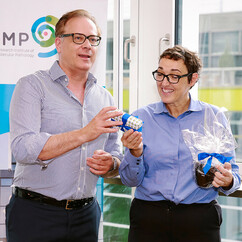 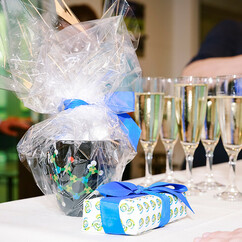 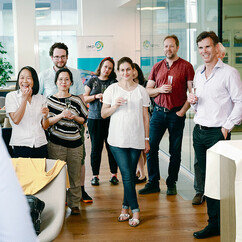 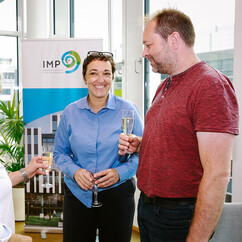 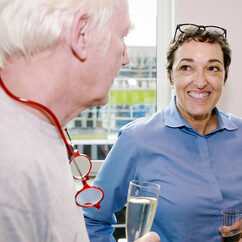 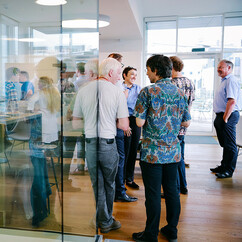 Angelika Amon studied biology at the University of Vienna. After her diploma in 1989, she became a PhD student of Kim Nasmyth and earned her doctorate in 1993. A year later, she joined the lab of Ruth Lehmann at the Whitehead Institute for Biomedical Research as a postdoctoral fellow. In 1999, she joined the Koch Institute for Integrative Cancer Research at MIT as Associate Professor and was promoted to full professor in 2007. At present, Angelika Amon holds the chair of Kathleen and Curtis Marble Professor of Cancer Research and is co-Director of the Paul F. Glenn Center for Science of Aging Research at MIT. She is an HHMI Investigator.

The research achievements of Angelika Amon have been widely recognized through numerous awards. Among them are the Presidential Early Career Award for Scientists and Engineers (1999), the Alan T. Waterman Award (2003), the National Academy of Sciences Award in Molecular Biology (2008), the Ernst Jung Prize for Medicine (2013), and most recently the Breakthrough Prize in Life Sciences (2019). Angelika Amon is an elected member of the American Academy of Arts and Sciences and an elected Foreign Associate to the Austrian Academy of Sciences and to EMBO.