We are deeply saddened by the passing of Angelika Amon, the Kathleen and Curtis Marble Professor in Cancer Research at the Massachusetts Institute of Technology in Cambridge, Massachusetts. Although we were aware of her serious condition, Angelika’s tremendous energy, sharp wit and compassionate spirit fooled us into believing she would emerge as a survivor. The scientific community has suffered a painful loss, but at this moment we are thinking of her family and close friends to whom we extend our deeply felt condolences.

Angelika Amon has been living and working in the USA since 1994, but she always kept close ties to the IMP, where her scientific career started. When she joined the institute as one of the first master students in the winter of 1987/1988, it was just a few months after her supervisor Kim Nasmyth had established his lab in Vienna, and only a year after the IMP was inaugurated. A pioneering spirit prevailed and it fitted Angelika perfectly. She was curious, bold and eager to learn – and she had found a great match for a mentor. Kim and the people in his lab took her under their wing and taught her “how to do science the English way: relentless and truthfully”, as she once put it herself.

Although Angelika later admitted that she was initially intimidated by the IMP’s reputation, she certainly rose to the challenge in no time. Often, she could be heard discussing her work passionately and loudly with Kim over coffee, her strong personality matching his confidence. By then, she had moved on to become a PhD student in the Nasmyth lab, and she had fallen in love with Saccharomyces cerevisiae. For her, budding yeast was the perfect model organism to study cell division, and her doctoral work yielded major insights into the controls that govern the cell cycle.

After her graduation in 1993 and a postdoctoral year at the University of Vienna, Angelika left Austria to join the lab of Ruth Lehmann at the Whitehead Institute for Biomedical Research in Cambridge, Massachusetts. Her ensuing research involved a sidestep to working with fruit flies, but she found that she preferred yeast for its versatility and short generation cycle. Ruth Lehmann, an accomplished developmental biologist, became an influential mentor and role-model.

When Angelika became a Whitehead Fellow in 1996, she set up her first independent research group. Looking back, she would call this fellowship “the best thing that happened in my life”. The freedom and resources she enjoyed, plus the fact that she had a co-worker, allowed her to pursue her career while starting a family. Through her own experience as a mother of two, she became a fierce promoter of women in science.

After three years as a Whitehead Fellow and before she had exploited the full duration of the program, Angelika accepted a faculty position at the Koch Institute for Integrative Cancer Research at the Massachusetts Institute of Technology. By then, her brilliant work and elegant publications had already earned her a reputation as one of the leading geneticists and scientific awards started hailing in.

Angelika Amon and the IMP 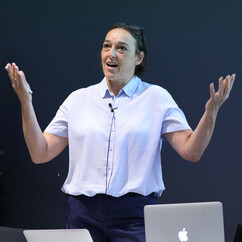 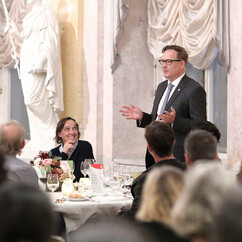 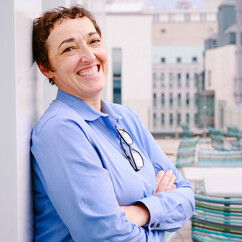 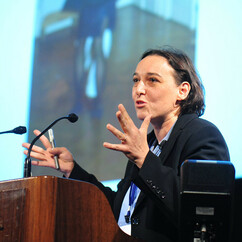 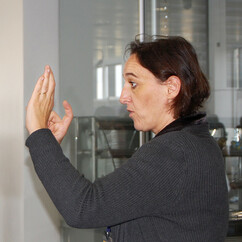 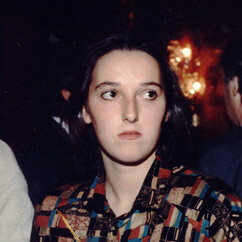 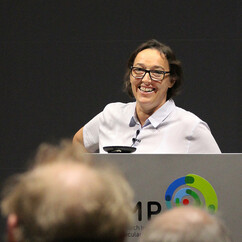 From an early stage in her career, Angelika was interested in cell division. She used budding yeast to study chromosome segregation and showed that a protein phosphatase called Cdc14 is a central regulator of the final stages of mitosis. She discovered that this enzyme is regulated by sequestration in the nucleolus and her studies provided the first paradigm for how spatial information is translated into a temporal signal.

Angelika also made important contributions to our understanding of meiosis, the developmental program that leads to the formation of gametes. For example, she discovered that in budding yeast, age associated phenotypes are lost during gametogenesis, resulting in a resetting of lifespan. This work provided important insight into the mechanisms of ageing.

Her most influential work began at the MIT, where she developed genetic tools in yeast and mice to study aneuploidy. This state, the presence of abnormal chromosome numbers, had already been recognized as a hall mark of many cancer cells in the 19th century, but it was Angelika who pioneered molecular research in this field. For the first time, she was able to analyse systematically the consequences of aneuploidy. She found that abnormal chromosome numbers cause a whole battery of cellular stress responses and in many contexts decrease the general fitness and proliferative capacity of cells. She also discovered that aneuploid cells tend to mis-segregate their chromosomes and that altered gene dosage effects disturb homeostatic mechanisms within cells. These studies, which she pursued with deep curiosity and great passion until only a week ago, had great impact on cancer research.

The list of Angelika’s academic merits is long, with the most glamorous one being the Breakthrough Prize in Life Sciences which she received in 2019. By that time, Angelika was already battling cancer, but outwardly appeared cheerful and energetic as ever. It was a great joy to have her over for a seminar talk in June 2019 and to celebrate her achievements and her long-lasting friendship. “The IMP was obviously instrumental for my career, for my entire grown-up life. I learned how to do science there - that’s no small feat”, she remarked during that merry afternoon. But she also recalled the challenges of that time: "I clearly remember the seminars at the IMP. Every single time was a terrifying experience. There were certain senior members of the faculty whose pastime it was to destroy you.”

Clearly aware of her own anxieties as a student, Angelika became a caring and supportive supervisor whose students describe her as an almost motherly figure. She was passionate about promoting the careers of young scientists and her "scientific offspring" - the Amonites - are plentiful and widespread.

The ties to the IMP remained close and strong. Collaborations had turned into friendships which lasted throughout the years she spent abroad. Scientifically, Angelika accompanied the IMP for ten years as member of the Scientific Advisory Board from 2009, before retiring from that position in 2019.

In a way, Angelika embodied everything the IMP stands for: curiosity and originality, fearlessness and independent thinking, collaboration and sharing, ambition and hard work. We yet have to comprehend that there will be no more lively discussions, scientific exchanges, and humorous conversations with Angelika. “Science will not be the same without her”, says IMP scientific director Jan-Michael Peters, colleague and friend of Angelika. “We will deeply miss her sharp intellect, her direct questions, and her loud laughter and humanity, all of which were so inspiring”. Although she is already missed acutely, her scientific legacy will be picked up and continued by so many of her peers that we will feel her presence and influence for a long time to come.

We use cookies that are technically necessary for the functionality of our website, but also cookies for functional and analysis purposes to optimise the user experience on our site. With your consent to the cookies, data is processed both by us and by third-party providers, some of which are based in third countries (e.g. the USA).

You can find more information about the tools and the partners in our data protection declaration, in which we also explain exactly what data transfer to the USA can mean. You can individually adjust or revoke your cookie settings at any time if you wish.

These cookies are necessary for the basic functions of the website. You can block or delete them in your browser settings, but you then run the risk that some parts of the website will not function properly.

Necessary to obtain consent for certain cookies and thus for the use of certain tools.

cookieUser
Used to recognise the browser and its cookie history (consent or rejection of particular cookies with date und time) by an anonymised identification number.
storage duration: 2 years

cookieNoticeAll
Used to check if the user allows all cookies.
storage duration: 180 days

Google Analytics: Web analysis service for evaluating visitor information in order to optimise the website and its offering.

Google Tag Manager: Tag management system for the central integration of tags via a user interface.

This service may transfer the collected data to another country. Please note that this service may transfer data outside the European Union and the European Economic Area and to a country that does not provide an adequate level of data protection. If the data is transferred to the US, there is a risk that your data may be processed by US authorities for control and monitoring purposes, without any possible redress available to you. Below is a list of countries to which the data will be transferred.

Enables the display of videos.

This service may transfer the collected data to another country. Please note that this service may transfer data outside the European Union and the European Economic Area and to a country that does not provide an adequate level of data protection. If the data is transferred to the US, there is a risk that your data may be processed by US authorities for control and monitoring purposes, without any possible redress available to you. Below is a list of the countries to which the data will be transferred.

__Secure-3PSIDCC
These cookies are used to deliver ads that are more relevant to the user and its interests. They contain an encrypted unique ID to identify the user.
storage duration: 2 years

YSC
This cookie is set by YouTube to track views of embedded videos. It contains an encrypted unique ID to identify the user.
storage duration: session

VISITOR_INFO1_LIVE
This cookie is set by YouTube to track views of embedded videos. It contains an encrypted unique ID to identify the user..
storage duration: 3 months

Enables the display of embedded tweets.

This service may transfer the collected data to another country. Please note that this service may transfer data outside the European Union and the European Economic Area and to a country that does not provide an adequate level of data protection. If the data is transferred to the US, there is a risk that your data may be processed by US authorities for control and monitoring purposes, without any possible redress available to you. Below is a list of the countries to which the data will be transferred.
USA

personalization_id
This cookie is set due to Twitter integration and sharing capabilities for the social media
storage duration: 2 years

guest_id_ads
This cookie is set due to Twitter integration and sharing capabilities for the social media
storage duration: 2 years