In a collaborative project, scientists including former IMP fellow Andrew Straw have developed a virtual reality system for freely moving animals. Their “animal holodeck”, named “FreemoVR”, will make it easier to study brain functions of different model organisms. The findings are now published in Nature Methods.

To study the neuronal basis underlying behaviour in living animals, scientists usually need to immobilise their subjects. Such an immobilisation has a price: it limits the way the animal perceives its environment and changes neuronal and behavioural responses. In addition, mimicking natural conditions in a laboratory is difficult.

The groups of Andrew Straw, an IMP fellow during parts of the project and now at the University of Freiburg, Kristin Tessmar-Raible at the Max F. Perutz Laboratories (MFPL) and others have now presented a system called “FreemoVR” that overcomes most of these hurdles by immersing a freely-moving animal in a reactive, virtual reality. IMP group leader Wulf Haubensak also contributed to the project, which was now presented in Nature Methods.

“We wanted to create a holodeck for animals so that they would experience a reactive, immersive environment under computer control”, says Andrew Straw. “This way we could perform experiments that would reveal how they see objects, the environment, and other animals.”

FreemoVR enables the experimenter to control the animal’s visual experience, while maintaining the natural feedback for its tactile senses. To do so, the scientists built behavioural arenas whose walls or floors are made of computer displays, including arbitrarily shaped projection surfaces. Using computer games technology, the animal could then explore the VR environment in these arenas from its own perspective while it walked, flew or swam.

To confirm FreemoVR’s ability to elicit naturalistic behaviours, the researchers provoked reactions of common model organisms to different stimuli. These included the responses of zebrafish and flies to a virtual upright post as well as mice, which showed to be equally afraid of heights in a real and virtual elevated maze.

In the future, the different teams hope to use FreemoVR to gain insights into brain function of high-level behaviours like navigation, to better understand causality in collective behaviour of social groups and, in the long run, to study the mechanisms of behaviour under conditions in which the brain evolved to operate.

You can find a full press release at the MFPL website: http://www.mfpl.ac.at/about-us/news/article/news-detail/when-fish-swim-in-the-holodeck.html

More about the work of Andrew Straw (now at the University of Freiburg): https://strawlab.org/

More about the work of Wulf Haubensak's group. 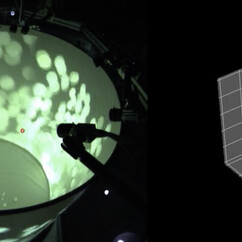 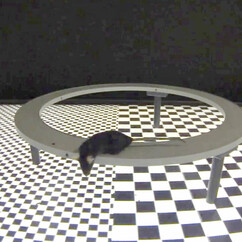 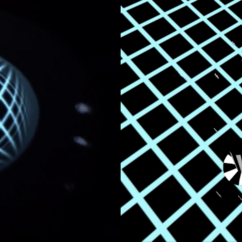 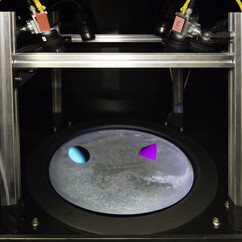 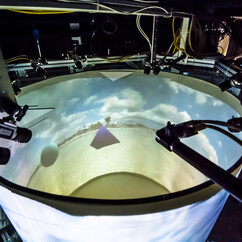