The phosphorylation of proteins plays a fundamental role in regulating cellular processes. Although most studies focus on pSer, pThr and pTyr, the phosphorylation of His, Arg and Lys seem to constitute equally important modifications that appear to be underrepresented in the literature. In fact, hundreds of phosphoarginine (pArg) sites have been identified in the phospho proteome of Bacillus subtilis, showing that protein arginine phosphorylation is an emerging posttranslational protein modification. The abundance of the pArg modification has been linked to important cellular functions including stress-response, thermotolerance and pathogenicity. Our work also revealed the two enzymes controlling pArg signaling: Arginine side chains are phosphorylated by the McsB protein kinase and dephosphorylated by the YwlE phosphatase, both of which act on arginine residues in a highly specific manner.

The McsB kinase is a major regulator of the bacterial stress response. It phosphorylates arginine residues within the DNA-binding domains of the transcriptional repressors CtsR and HrcA, thereby inducing the expression of heat-shock genes. In addition, McsB functions as a ‘degradation labeler’, marking substrate proteins for degradation by the ClpC:ClpP protease. The importance of the pArg-dependent degradation pathway has been shown to be critical for removing damaged proteins that accumulate during stress situations. Given the conceptual similarity of the pArg and poly-ubiquitin degradation tags, the pArg-ClpCP degradation system can be considered as simple bacterial version of the eukaryotic ubiquitin-proteasome system, with the McsB kinase playing a similar role to the E3 ubiquitin ligases.

Given the great importance of myosin activity for life on earth, the folding of myosin represents an equally important process. To this end, the myosin motor domain comprises a complicated protein fold that requires the activity of several chaperones to reach its functional state. Moreover, the assembly of myosin filaments within the highly organized frame of the muscle sarcomere must be coordinated - spatially and temporally - with the folding of the individual motor domains. While it is known that this process relies on the muscle-specific chaperone UNC-45, the precise mechanism of myosin maturation and the identity of further folding factors involved in this process have remained elusive.

Heading towards a mechanistic understanding of myofilament formation, our group carried out a detailed biochemical, structural and in vivo analysis of the UNC-45 chaperone from the nematode C. elegans. Strikingly, our data revealed that UNC-45 can compose mini-filaments providing multiple binding sites for the myosin substrate as well as for the co-working chaperones Hsp70 and Hsp90. Indeed, this multi-chaperone complex mimics an industrial assembly line putting a powerful motor together. Accordingly, UNC-45 represents a distinct type of filament assembly factor that offers multiple dockings sites for partner chaperones to work side-by-side, at regular spacings on captured client proteins. We now plan to study whether this "patterned folding" mechanism is critical for the assembly of other protein filaments and to what extent this mechanism is relevant for human myopathies caused by myosin assembly defects.

Targeted degradation by the ubiquitin-proteasome system: From small-molecule PROTACs to multiprotein death-tagging

We are interested in studying ubiquitination enzymes that mark specific client proteins to be degraded by the 26S proteasome. Among the involved enzymes, the E3 ubiquitin ligases represent the largest family attaching poly-ubiquitin chains to cognate substrate proteins. How the E3 enzymes select the right substrate at the right time and how they assemble poly-ubiquitin chains of varying types and lengths is a matter of intense research. To this regard, we focused our analysis on complex E3 ligases implicated in cancer and targeting disease relevant proteins. Moreover, our E3 model systems represent intricate molecular machines, having for example an extraordinary molecular size, complexity or substrate targeting mechanism.

In our most recent study, we addressed the degradation mechanism of muscle myosin. We could show that, depending on its teammate, UNC-45 can fulfill dual roles in muscle cells. During development, UNC-45 collaborates with the general chaperones Hsp70 and Hsp90 to fold myosin and promote myofilament formation. During stress conditions, however, the UNC-45 chaperone can team up with the UFD-2 ubiquitin ligase marking damaged myosin molecules for degradation by the proteasome. The discovered UFD-2/UNC-45 “death-tagging” system, in which a degradation enzyme utilizes a specific molecular chaperone as Substrate Positioning System, has broad implications for how to find and deal with problematic proteins in the cell. Accordingly, the revealed mechanism of myosin quality control may help to address protein misfolding defects underlying skeletal and cardiac muscle diseases. Future studies aim to further explore the myosin degradation system and “reprogram” the system by small molecules to target pathologic proteins in muscle cells. 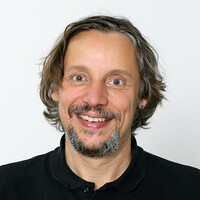