All cells have evolved a sophisticated protein quality control system by which molecular chaperones and proteases monitor the functionality of each protein, thus reducing the amount of misfolded molecules that may undergo dangerous interactions. Our group performs a structure-function analysis of several eukaryotic and prokaryotic quality control factors with the purpose of disclosing novel strategies to combat protein-folding diseases and bacterial pathogenicity.

Cellular differentiation is a process commonly associated with multi-cellular organisms and their development. However, differentiation into specialized cell types is also employed by a range of bacteria. One classic example is the endospore-forming bacterium Bacillus subtilis that can differentiate into dormant and stress-resistant spores to survive harsh environmental conditions. Spore formation in Bacillus subtilis relies on a regulated intramembrane proteolysis (RIP) pathway that synchronizes mother-cell and forespore development.

To address the molecular basis of this SpoIV transmembrane signalling, we performed a structure-function analysis of the activating protease CtpB. Crystal structures reflecting distinct functional states show that CtpB constitutes a ring-like protein scaffold penetrated by two narrow tunnels. Access to the proteolytic sites sequestered within these tunnels is controlled by PDZ domains that rearrange upon substrate binding. Accordingly, CtpB resembles a minimal version of a self-compartmentalizing protease regulated by a unique allosteric mechanism. Moreover, biochemical analysis of the PDZ-gated channel combined with sporulation assays reveals that activation of the SpoIV RIP pathway is induced by the concerted activity of CtpB and a second signalling protease, SpoIVB.

This proteolytic mechanism is of broad relevance for cell-cell communication, illustrating how distinct signalling pathways can be integrated into a single RIP module. Depending on the origin of the signalling proteases, such a mechanism could coordinate either different transcriptional programs within a single cell or, when the signalling proteases are secreted from two neighbouring cells, link the RIP signal cascade to the cell-cell communication that coordinates developmental programs, among other aspects.

The reversible phosphorylation of proteins plays a critical role in regulating almost any cellular process. Although most studies analysing protein phosphorylation have been focused on pSer, pThr and pTyr, phosphorylation of His, Arg and Lys may constitute an equally important modification that appears to be underrepresented in the current literature. In 2008 we discovered that McsB of B. subtilis is a protein arginine kinase that phosphorylates and inhibits the stress-response repressor CtsR.

Last year we completed studies that led to the identification of a highly specific arginine phosphatase (YwlE) counteracting McsB. Structural and biochemical data of YwlE-substrate complexes disclosed a surprisingly simple polarity filter that is installed to distinguish pArg from other phospho-residues. A single active site residue, a threonine, is used to identify the phosphorylated guanidinium group and select pArg against pTyr, pSer and pThr. Based on these findings, we discovered a pArg phosphatase in Drosophila, but could not assess the biological relevance of pArg in eukaryotes.

On the contrary, we obtained preliminary evidence that in bacteria, pArg phosphorylation may serve as a degradation signal targeting substrates to the ClpCP protease. To address this point we plan to perform a detailed structural characterization of the McsB arginine kinase and its partner protein McsA. A crystal structure of the McsB kinase would be interesting for several reasons: a) it may delineate the molecular basis of how McsB marks specific stress-response factors for degradation, b) it may provide a detailed insight into an unprecedented protein phosphorylation mechanism, and c) it may facilitate the search for potential protein arginine kinases in eukaryotic cells. 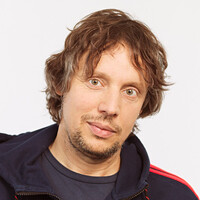